I'm back at Las Campanas with the MagAO team! But tonight I'm just cross-posting an interview I did for the DTM website. Read the Interview

Posted by Alycia Weinberger at 19:58 No comments:

One of the most difficult experiments we did in my undergrad physics class involved calibrating a finicky Fabry-Perot interferometer. The MMTF tunable filter on IMACS at Magellan works on the same principles, where you precisely calibrate the alignment and spacing of two parallel plates to allow only a small range of wavelengths to pass through. After talking with fellow Carnegie postdoc Rosalie, we had an idea for a possible project which would involve the tunable filter, and decided to go for it.

We allotted ourselves a big chunk of time in the first afternoon to get everything set up for the first time, and after some skype help from Ben Weiner, got our calibrations all set for the night. We were pretty happy about this, come sunset: 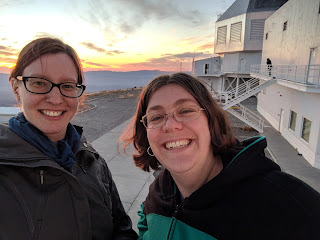 (Decker and Rosalie, after successful calibrations, trying not to think about the clouds in the background)


After some threatening clouds, things cleared up enough to start taking data, and we got on our science target: 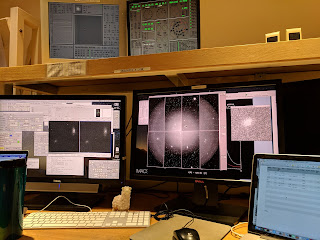 (Science data with the MMTF!)

I'm super excited about what we're seeing in the quick-look of the data, and looking forward to seeing what happens after the full reduction!

Unfortunately, the clouds did end up rolling in halfway through the night: 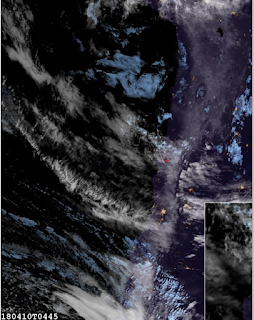 So, we'll have to try again tomorrow night and hope for clear skies.