Observing over Christmas and New Years

What have you been doing on Christmas eve ?

I was observing with the du Pont telescope looking at other galaxies and supernovae.

And Christmas day ?
I was sleeping preparing to observe the night of the 25th as well.

Normally the observatories at las Campanas in Chile are officially closed on the 24th and 25th of December. My run also only started on the 26th. However there is an exception. As a telescope operator you can ask for time during these normally festive days. And that is what Nidia did. She is one of the operators of the du Pont telescope and very dedicated to research and observing. Usually, when one obtains time to observe at this telescope, one is accompanied by an operator during the run. On the 24th and 25th however, Nidia would have been observer and operator at the same time.

Since it is always good to arrive one (or two) days before a run (just to adapt more smoothly to the night schedule), I thought it was a good idea to accompany Nidia on her Christmas run. Plus, it is of course nicer to have some company to keep each other awake. Plus: Nidia is like the Einstein of operating this telescope. If you can learn from her, you will know all the little tricks that will allow you to observe in the best and most efficient and accurate way possible. For example, for small offsets, instead of calculating offsets for the telescope and moving the telescope itself, Nidia would calculate the offset that would have been applied to the guider camera and move that one instead. This technique resulted in a significantly better precision in tuning fine offsets. So afterwards, I applied this trick during our observations - to the surprise of my colleagues who had observed many times at the du Pont and did not know about this clever technique by Nidia.

During these festive days, the observatory is also decorated beautifully in Christmas style (see photos). The residency has a big Christmas tree and even in the observing control room, one can find a mini version of such a tree. All in contrast to the dry desert without *any* trees outside, enjoying long summer days (we are in the Southern hemisphere of course). At Christmas, really only two of the probably 30 tables inside the residency are filled with people. A very tiny group. But very cosy. The observatory also makes an effort to serve special dinners during these days. So after a nice meal, Nidia and I head off to the du Pont and observed during beautiful conditions (at least on the 24th). The 25th prepared strong winds. So, even when the sky is clear, no clouds or rain, one cannot observe if the wind is stronger than about 35mph. Once it passes this threshold consistently, the telescope dome has to be closed. After, the wind has to drop below this mark at least for half an hour to reopen. And unfortunately this was not the case on the 25th. But never mind, we still had a good time.


And New Years?
Observing!:) This is in fact a special day, but it is an official observing day, so the telescopes are not closed like on Christmas. Nevertheless, we also received a special meal. This time, there were obviously a few more people, so the table in the residency got extended (but the Christmas decoration remained) - see photos. The rest was pretty much the same. - well, more or less. I had a friend from Spain to come visit me that night and so we could do the Spanish New Years tradition: together with our operator, we ate 12 grapes at each bell at midnight, making wishes for the new year. However where are the bells in Las Campanas? Funnily enough, the name “Las Campanas” means the bells. This originates due to a certain type of rocks that can be found on that mountain. These rocks produce a very nice ‘bell-sound’ when gently hit against each other. So due to the lack of real bells, we prepared some rocks, recorded the sounds and played them at midnight…. one might go a little crazy after 1-2 weeks of night time observations in a remote place in the Atacama desert….but it was so much fun!

….and here is a little time-lapse that I took during this run (so parts of the sunrise are really the first sunrise in 2017! and others are stars in the night sky at Christmas - not that this matters, but still) I hope you enjoy it!

I'm back observing with Magellan II at Las Campanas Observatory, this time with the Planet Finder Spectrograph, which I've blogged about here before. I came straight to LCO from the 229th American Astronomical Society (AAS) meeting in Dallas, TX, where I was reminded of how overwhelming yet thrilling these huge astronomical gatherings are. It took me back to my times attending as an undergraduate student; many summer internship programs, including the one newly started at Carnegie Observatories and one I just learned about for Argentinian students at Las Campanas, provide students with funding to attend the winter AAS. Attending the meeting and presenting a poster was, for me, an eye-opening and very exciting experience, a window into the world of professional astronomy. It is the culmination of a summer, and sometimes fall semester, of authentic astronomy research that is really the best way for students to decide whether they want to pursue a career in astronomy or astrophysics after college. Such research internships are often the start of strong friendships with other interns, and can also be the start of the incredibly important mentoring relationships that carry students (at least, they carried and continue to carry me) through their careers.  To those hosting students this summer, think back to how formative this experience was for you in your career, and about how you can make this summer the best it can be for your student(s). For those applying, my advice is to take advantage of the opportunity to work on something you haven't before, and soak up all the knowledge from your fellow interns that you can. I learned just as much, if not more, from my intern buddies during my REUs, especially about the practice of astronomy (versus the content knowledge). 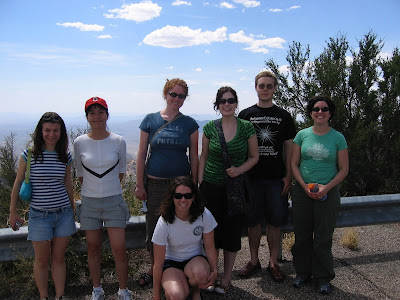 Maria Mitchell Observatory summer interns (I'm down in front), and my research mentor Jackie Milingo, at Kitt Peak Observatory during the summer of 2006. I worked with Jackie studying chemical abundances measured in planetary nebulae. 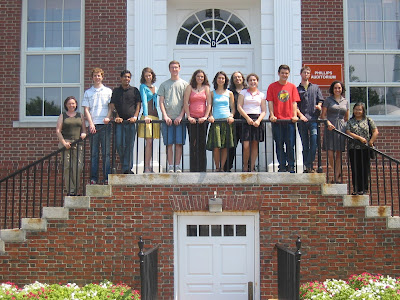 Harvard/Smithsonian Astrophysical Observatory summer interns with program coordinators outside
Phillips Auditorium at Harvard in the summer of 2007. That summer I measured different types of emissions (optical, IR, X-Ray) in merging galaxies to better understand what controlled star-formation and AGN activity.

At the AAS meeting, I was pleasantly surprised to run into one of my mentors, Michelle Edwards, whom I met in graduate school at the University of Arizona where she is a Support Astronomer for the Large Binocular Telescope. Michelle and I didn't work directly together very much, but she was the person who turned me on to instrumentation, and cheered me on during the last few years of graduate school when I was struggling. It was from Michelle that I realized working at an observatory was a career option, one that I very much still consider as a possible path. Michelle and I are still close, and when I saw here across the large poster hall at the AAS meeting, I yelled out her name and ran over to give her a big hug. Although I'm no longer a student, I still go to Michelle for advice and support, and now I feel like I can support her, too. Mentors aren't always you're friends, but I have been lucky enough to become friends with most of mine. 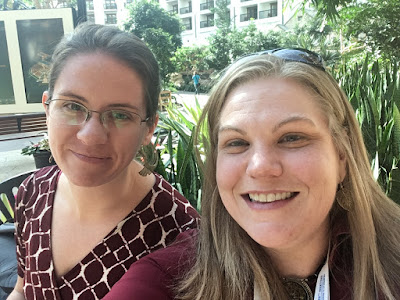 Michelle (right) and me at the AAS meeting.

The person who has mentored me the longest is Alycia Weinberger, who has written blog posts here before. I started working with Alycia during my senior year of college for my honors thesis, reducing and analyzing spectra from the MIKE instrument (which I use now in my postdoc!) of young stars with disks of gas and dust around them that we think are the sites of planet formation. Working with Alycia was an experience that kept me going through graduate school -- I thought if I could only make it through and get back to DTM, it would all be worth it. Lucky for me, I got the chance to go back for my postdoc, during which Alycia has continued to be a great mentor and also grown into a great friend. And now we're collaborating again on a few observing projects!

Alycia's advice comes from years of being successful in astronomy, pushing the fields of young stars and planet formation forward with new observations and observational techniques, and also from years of mentoring other young women like me. In fact, while interning at Carnegie DTM, I also met Mercedes Lopez-Morales, whom I went observing with right after graduating college on my first trip to Magellan and who has also been mentored by Alycia. Mercedes is now at the Center for Astrophysics at Harvard, and our work overlaps -- we are both using radial velocity spectrographs to measure the masses of transiting planets! Mercedes has become a mentor to me, too, guiding me through the many twists and turns in the field of exoplanets, offering advice about science projects and career choices, and, like Alycia, serving as a role model who balances an amazing career with mentoring students and having a family. 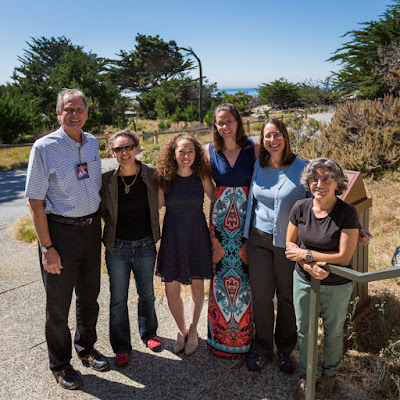 You may be noticing a pattern...almost all of my mentors and advisors have been women! This was also the case during my PhD, where I had two co-advisors, both of whom were women. I honestly have not tried to do this on purpose, but I haven't avoided it either. Sometimes I wonder what this means about my personality and work style...but I am constantly thankful for the compassion, patience, and guidance these women have shown me. 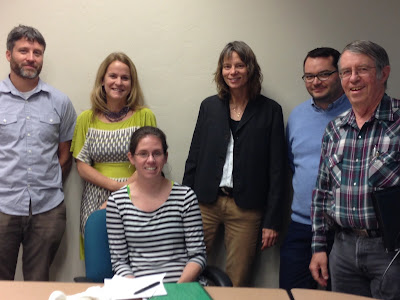 My graduate thesis committee and me, after I successfully defended. Katia Cunha and Caitlin Griffith were my two co-advisors, and I still work closely with Katia today. She is visiting next month and I'm very excited to see her again!

In science, like in the rest of the society, women are still not on equal footing. I think any close mentoring relationship is important, and some of my best mentors right now are men who have taught me a lot and are incredibly supportive of my ideas (even when I make mistakes). But I have found that those relationships I have with fellow women are enhanced by our shared experience of needing to work a little harder, speak a little louder, and have the confidence to stand up for ourselves, even when we're the only woman in the room. I have these mentoring relationships with women to thank for where I am today, and wherever I end up in the future (and I really haven't done them justice here, apologies!). They saw/see something in me that I did/do not see myself.

Have you had particularly influential mentors in your career? What about pivotal internship experiences? Share them in replies to this post!
Posted by Johanna at 02:29 No comments: