Tonight I bring you pictures and movies.

Here is a beautiful video by another Las Campanas Belle, Anna Frebel (who tweets at @annafrebel), that shows how the sky changes across a night of observing here in the Southern Hemisphere.

And here is what a pretty good night looks like to an optical spectroscopist:

Oh, and as promised, here was the food-art from last night's dinner. I did not partake (it was obviously not vegan), but I certainly appreciated the mastery. Thanks, Chef Hector!

Tonight is the first of a ten-night run of the Planet Finding Spectrograph, PFS, on Magellan II (Clay). It's my second run as a PFS observer, and I'll celebrate two anniversaries here -- my birth, and the day I officially started as a Carnegie postdoc (July 1st last year). I can't think of a more appropriate place to be! I'm excited to FIND SOME PLANETS.

From the PFS website, it's "a high resolution, optical echelle spectrograph that covers wavelengths from 388 to 668 nm with resolving powers from 38,000 to 190,000. The high efficiency optical design includes all spherical, standard optical glass and calcium fluoride lenses that function as both camera and collimator in a double-pass configuration that allows the R4 grating to be illuminated in a near-Littrow configuration. A prism is used for cross-dispersion. A molecular iodine absorption cell is used to superimpose well-defined absorption features onto the stellar spectra to aid with point spread function deconvolution and wavelength calibration. PFS has been in scientific operation since 1 January 2010."

It was designed and built by Stephen Shectman and Jeff Crane from the Carnegie Observatories, and is used for detecting planets around other stars via the "Doppler wobble" the planet causes in the star and the light we receive from the star. This is one "indirect" detection method of planets -- we never actually see the planet itself, just its effects on the stars -- versus "direct" detection methods, like what my friends are doing with MagAO.

I arrived yesterday, along with Mattias Diaz and Paul Butler, to meet up with Jeff Crane and get PFS prepped for installation on to the telescope. (We followed these instructions, if you're interested in the finer details.) Yesterday Jeff showed Mattias and I how to pump down the pressure in the grating vacuum chamber and in the CCD chamber of PFS. We then filled the CCD dewar with liquid nitrogen to start cooling it down. All of these things act to stabilize the environment inside of PFS, and keep it stable for the entirety of our observing run. Because we are trying to make very precise measurements -- tiny tiny shifts in lines of stellar spectra -- it is important that nothing change inside the instrument that could affect our observations and measurements.


Today we got up "early" (in time for lunch) and headed up to the summit to move PFS from the Magellan auxiliary building into the dome and up onto the telescope platform. This process required multiple people, and slooow, purposeful movements. Once we had the instrument on the telescope platform, it had to be aligned with and lowered into three baseplate junctions. Apparently the "spherolinder blocks" are proprietary! They serve as hard mounts for PFS, but also allow it to move smoothly in a few directions, so there are no jerky movements or torque on the instrument. That was the trickiest part, but only took about 20 minutes. Then it was just a matter of plugging in many cables and installing the baffles around the guider camera cover place and instrument entrance aperture (where the light comes through the telescope into the instrument).

Overall the installation went smoothly with no problems, thanks in large part to the excellent Las Campanas Observatory staff. Muchas gracias!


And now...we're over halfway through our first night! We closed for about 25 minutes due to high winds, but have otherwise been cookin'. The seeing -- how much Earth's atmosphere is jittering and smearing out our observations -- isn't very good, but it isn't awful, and we are making progress. I'll write more tomorrow about how observations are going, and our food-art dinner.

We want to honor one of our biggest astronomy heroes as a part of the trending hashtag #ThankYouSTEMWomen. Vera Rubin, astronomer emeritus at Carnegie's DTM, is ground breaking in multiple ways:
...to name just a few!

With the help of Natasha Metzler in the Media Office at the Carnegie Institution for Science and Shaun Hardy, Carnegie's librarian for DTM and the Geophysical Laboratory, we have uncovered a very rare photo of Vera. As far as we can tell, this photo has never been published on the internet before *today*.

Here is Vera Rubin on her ground breaking observing run at Palomar in December 1965: 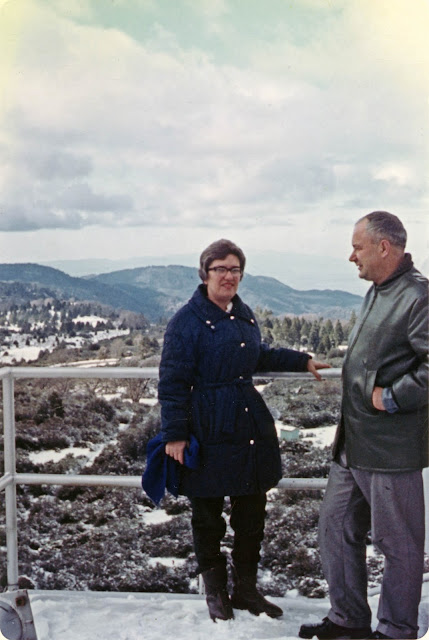 She is standing on the dome of the 200" telescope with Polish astronomer Konrad Rudnicki, who was a senior research fellow at Palomar at the time. That night Rubin observed on the 48" Schmidt telescope, the first woman to officially observe under her own name as an astronomer at Palomar Observatory, which at the time was jointly operated between Caltech and Carnegie.

Rubin has always been a role model for women in astronomy, and encouraged everyone to explore the sciences. In 1996, she told the Berkeley graduating class: “Each one of you can change the world, for you are made of star stuff, and you are connected to the universe.”

Tonight is Astrometry night again!  I'm currently using the Carnegie Astrometric Planet Search Camera (CAPSCAM)--built by my esteemed colleague Alan Boss--to image young brown dwarfs at the exoplanet mass boundary.  Last night I was taking medium resolution echelle spectra of them and tonight I'm getting images so we can dig into their fundamental parameters.  For the past few years I have been building this extremely important collection of age calibrated exoplanet-like brown dwarfs.  When it's all pretty, reduced, and published, I'll make a database available to the community which will be critical for exoplanet comparative and characterization studies. One reason why Carnegie is such a fantastic place for someone with my scientific preference and expertise is because all of the instruments I need are wrapped up in this one fabulous observatory.

Speaking of a fabulous observatory, tonight I explored a few things in the du Pont telescope.  I discovered the lounge room which had a light table and a few old photographic plates lying around.  Sergio (our fantastic telescope operator) helped me look through them.  At left is an old plate of the Large Magellanic cloud (LMC) taken in the 90's.  Funny that the 90's seems so outdated now.  CCD's is where its at!  At right is Sergio standing with the light table that was used to illuminate the plates so you could do science.  Super old school. 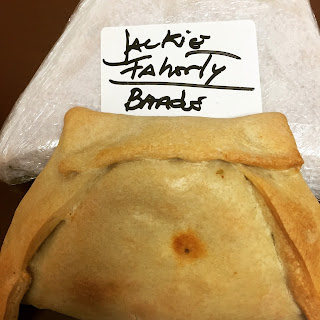 And one last important note for tonight.  It was EMPANADA night!  Every Sunday at the observatory, astronomers are graced with the awesomeness of the Las Campanas empanada (that is what I will call it from now on).  I think Anthony Bourdain should return to Chile and get a taste of these.  They are fantastic.  I would try to schedule all my observing runs to fall on a Sunday if I could just so I could make sure I got my fix of this tasty treat.   I'm headed down the mountain tomorrow to visit with my old officemate David Rodriguez and I've got a spare empanada for the road.

On the duPont Telescope at Las Campanas, we have a specialized astrometric camera, designed to measure the positions of stars with great accuracy.  I am using it to find the distances to young stars, Jackie Faherty is using it to find the distances to young brown dwarfs, and Alan Boss spearheaded its construction so as to search for planets around low mass stars.  Here are Jackie and Jessica Donaldson, our newest user, during the afternoon. We were taking a walk around the catwalk while we took calibration frames with the camera. Nice blue sky, isn't it? Once the sun set, it was a nice clear sky for observing. 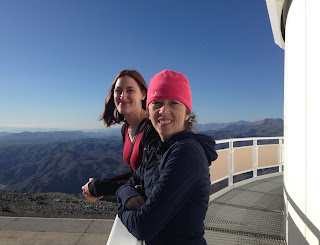 Posted by Alycia Weinberger at 05:42 No comments: