Bring Your Mom to Work Day(s)

Every since I started observing at Las Campanas, I've talked to my mom about how amazing it is -- the views, the facilities, the people, the food. She loves hearing about my adventures and seeing pictures, and closely follows Yuri Beletsky (whose pictures surpass mine by far). She also has a deep appreciation for nature and how awesome the universe is. Thus it was my great pleasure to treat her to a trip to Las Campanas! I'm here for a two-night MIKE run to observe stars that host cool Jupiter exoplanets. I'm working with Jonathan Fortney and Daniel Thorngren to understand how the composition of these stars may be related to the heavy element mass locked up in their gas giant planets. You can read more about the project in Daniel's paper.

What this post is mostly about is Las Campanas from my mom's perspective. Here is our mini interview:


2. How was your travel to the telescopes?
The travel was long! I traveled from Harrisburg, PA. Johanna and I had adventures flying from Miami to La Serena, sleeping in little pods on the plane. But the drive up to the telescopes was amazing- the road kept getting steeper and steeper until there was no more road. We reached the top of the earth! I kept thinking about all of the amazing people who build these telescopes and how challenging their journey must have been.

3. What were you most looking forward to? Has that happened?
I was most looking forward to seeing the Milky Way. We saw it last night and it was amazing. Dizzying, in fact! A lifetime event for me. And watching the sunset was unlike anything I have ever seen. Ribbons of reds and oranges with no cloud interference. And SO MANY STARS! I will never forget that night sky. Lastly, hearing about Johanna's adventures so far and her ideas about her future. She inspires me!


4. Has anything surprised you so far?
The temperature has surprised me -- I expected it to be cooler during the day, but it is actually quite pleasant. Another thing that surprised me is how astronomers "share" data and "time" with each other. Johanna is actually using some of her time tonight to "pay back" a colleague who got some observations for her earlier in the year. It is a concept that is not common across other sciences -- folks can be territorial about their data.


5. What have you done at the Observatory so far?
We took a nice long walk this morning and I got to see all of the telescopes. I heard a bit about the history behind each one, which I enjoyed. I also saw some new flora and fauna, which is always of interest to me. I also have enjoyed the meals at Las Campanas and was happy to be here for Empanada Sunday! I am looking forward to seeing Johanna in action tonight as she observes. But the night sky and time with my daughter are the highlights so far.


6. How would you describe Las Campanas Observatory to other people? What does astronomical observing look like (to someone who does not do it for a living)?
It is not what I thought it would be like. There is a lot of sitting at computers doing compter-y stuff. But last night, I was witness to some exciting science happen. One of Johanna's colleagues found some important stuff for his research, and while I was not clear on what it was, there was an excitement in the room that was palpable. I also am now aware that the observing runs are just PART of the work. For example, I am spending the afternoon with my daughter as she "calibrates" the instrument she will be using tonight. Then she does the observations, then the analysis, then the writing of the paper. I am learning that astronomical observing is just part of a larger process.

7. Any tips for first-timers?
Ask lots of questions, drink lots of water, rest after walking uphill, take lots of pictures. And look up at the night sky every chance you get. The excitement starts after sun down!

8. Anything else you'd like to share?
My gratitude for the staff and scientists who allowed me to come and be a part of this awesome experience.

First Time in the Southern Hemisphere!

This trip had a lot of first for me: first time going observing at a major observatory, first time in the Southern Hemisphere, first time taking infrared spectra and images, and last but not least first time doing it on my own after only two days of training. I was so excited when I first got to Chile. There was so much to see and especially when I got to Las Campanas all I wanted to do was look around. When I arrived I was under the impression that we were going to start observing that night, but to my surprise we didn’t start until the next day, which was great for me since I was exhausted after the long flight.

On day one of observing, after lunch I went up to Baade to meet my advisor, Jackie Faherty, to start calibrations for FIRE and Fourstar. Learning about calibrations was simple enough, especially since all of the information could be found in previous nights logs. After calibrations I had some free time to explore before dinner.

The first I observed using FIRE on the Baade telescope. When I saw the telescope for the first time my first thought was “This is SOOO big. I feel so tiny!”. You can see me to scale with the mirror, no joke this telescope is enormous and I can’t even fathom how crazy it will be to look at the GMT. 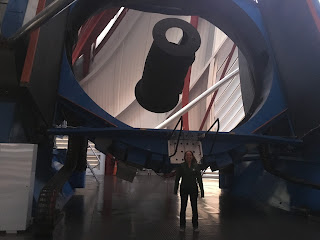 The night wasn’t too intense, but it was a lot to take in knowing that in two days I would be on my own. At first I made a few mistakes, mostly incorrect filenames, but as the night went on I started to feel more comfortable with the instrument. Also, having a ton of notes on the processes helped to ease my nervousness about the upcoming night alone.  The conditions were’t the best but we managed to get a fair amount of targets done.

On the second night I used both FIRE and FourStar. FourStar was much simpler to use, which made me less worried about the next night, since I would be using both instruments. The conditions were great, so I got lots more experience using FIRE and I managed to make very few errors over the night. I was quite proud about that! At the end of the night Jackie and I discussed the plan for the next night. At that point I felt fairly comfortable to be left on my own with my game plan in hand, I headed off for bed. 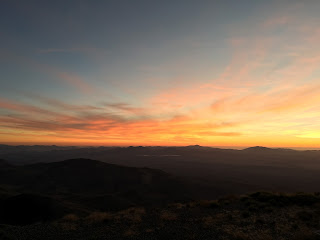 This brings us up to tonight where I am alone. Eek! Calibrations made me a bit nervous, since the first question I got from the telescope operator was about what to do with the mirror cover. He hadn’t asked us previously so I felt unsure about what to do, but I once I thought about it the answer was clear and my fears of messing up calibrations went away. At dinner I met the person who was going to be on Baade after me. He was very curious to see how FourStar works, so he decided to join me for part of the night. The conditions needed up being perfect and the night was smooth sailing! Now I just need to get all of this data transferred and then off for a nap!
Posted by Unknown at 06:49 No comments: