Everything Is Awesome When You Have 0.4'' Seeing

Tonight is my first night of a two night run on MIKE (see previous post), a high-resolution spectrograph on Clay (Magellan II) at the lovely LCO. Last night I pestered/helped entertain Jackie Faherty, another postdoc at DTM who is an avid photographer and tweet-er. You'll hear more from her soon. The weather last night fantastic -- little if any cirrus, low winds, balmy temperatures, and seeing around 0.5'' all night. That means that the area over which the starlight was spread (the "seeing disk") was pretty small. This means that the light was more focused and easier to observe, especially for spectroscopy, which places a slit over the star's image and disperses the light into different wavelengths. Observers who use spectroscopy need a stable, clear atmosphere so that as much of their target's light as possible goes into the slit and is collected by the detector to be processed into SCIENCE results!

I got lucky against tonight and the conditions have been great, with seeing reaching as low at 0.44'' (lower seeing = better) and not going much above 0.65''. One of the many wonderful things about LCO and the Magellan telescopes is the good seeing, better on average (in my experience) than any other observatory I've visited. It made me think of "The Lego Movie" theme song, "Everything is Awesome!", which has the lines: 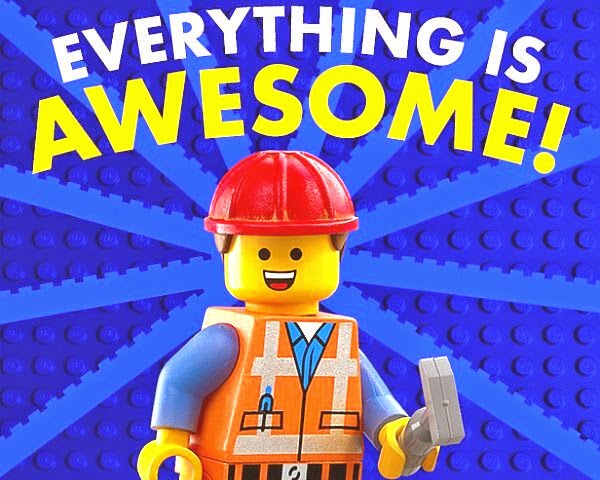 As promised, here is a snapshot of the projects I'm observing for on this run. All the projects use high-resolution spectra to measure the chemical abundances of elements in stars. For a good mini lesson about this topic, check out here, and also my friend Natalie's huge database of stellar abundances.

Giant Planet Host Stars -- Determine the abundances of several key planet-building elements (C, O, Si, and Mg) in a sample of hosts to cool, ~Jupiter-sized planets. The host star chemical abundances will be compared to the bulk metallicity (enrichment) of their planets as determined through interior models of planetary thermal evolution, allowing the best constraints to date on exoplanet interior composition and how this relates to formation environment. Determine C/O ratios in host stars of transiting, hot Jupiter-sized planets to complement the detailed analysis of the exoplanets' atmosphere transmission and emission spectra based on Hubble Space Telescope and Spitzer data. The exoplanet atmosphere and host star C/O ratios will be compared to constrain the planet formation processes in these two systems. Interestingly enough, a paper about this, which is quite relevant to my work, just came out on our public paper arXiv tonight! I'm eager to read it when I'm not so tired.

Planet Host Stars in Binary Systems -- Study known host star binary systems in which one or both stars host planets large-ish exoplanets. It builds on my previous study of another host star binary in a search for the signatures of different types of planet formation on host star abundances. Disentangling how an individual star’s atmosphere is affected by the local or global composition of the disk, the formation of planets, and its broader position in/motion through the Galaxy during its evolution is difficult. However, binary host stars provide a unique and potentially less complicated environment for constraining the magnitude of planet formation effects on host stars, as they are assumed to have experienced similar environments throughout their lives. So the idea is to study pairs of stars that should be chemically identical to see if they're actually chemically different, and if this could be related to formation of (or ejection, or the star "eating") different types of planets.

Solar-type Stellar Companions to Brown Dwarfs -- This is a brand new project comparing brown dwarf abundances to those of their higher-mass companion stars, and will help answer whether directly imaged planets and brown dwarfs are more/less similar to their host stars, shedding light on their formation processes. The C/O ratio is also a diagnostic in this case, to help understand whether brown dwarfs form more like planets or more like stars. My colleagues and I just submitted a new paper on this study, and we're expanding it to more systems and a larger parameter space. We'll see what the referee thinks...usually I like to wait until a paper has been accepted to post it to the public arXiv (where anyone can read and comment on it), but it wasn't totally my decision in this case (I'm not the first author).

Alright, time to do some end-of-the-night calibrations and then get my data reduction with Dan Kelson's MIKE pipeline to see if I need to re-do any targets tomorrow (er...later today)!

Oh, I almost forgot -- this is a blog about women observers at LCO, and today there were four women workin' on the mountain! 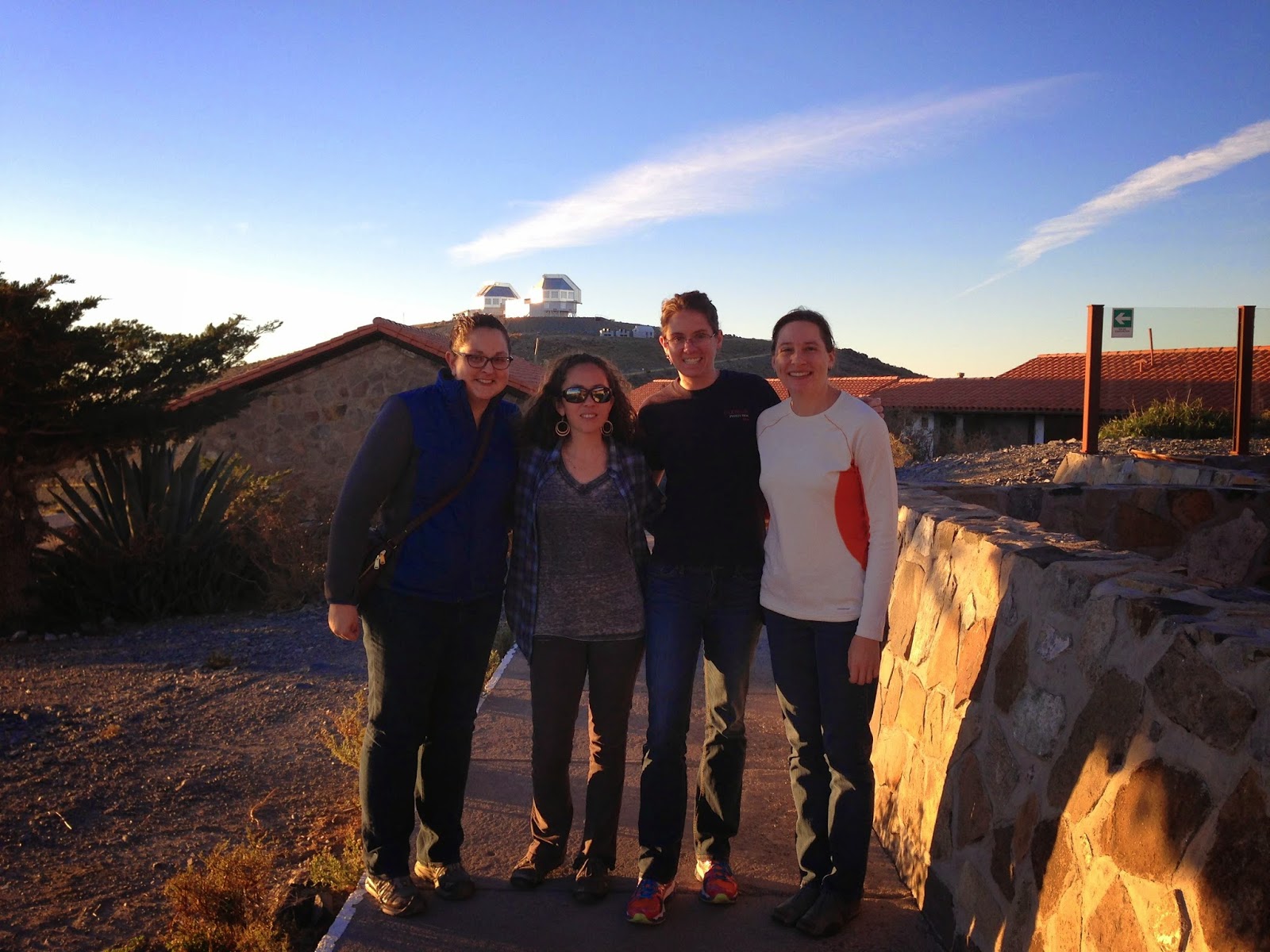 From left to right:
Gwen Rudie is a postdoc at Carnegie Observatories, Jackie you'll meet soon, (me), and Katie Morzinski is the Magellan AO Instrument Scientist. The MagAO team are also doing super cool exoplanet-y science and WAY COOL new instrumentation, and you can read all about it on their blog, which helped inspire this blog. Sagan Fellow Jared Males was our expert photographer.
Posted by Johanna at 05:57 No comments:

For the sake of the stars...

The last few days have been very eventful ones in the USA (my home country) and abroad. Multiple natural disasters affecting thousands of people, a fight for marriage equality in the US Supreme Court, the halting of building and serious reconsideration of a next-generation telescope to (try to) fully consider the long-ignored voices of Native Hawaiians, and the continuation of police brutality against Black citizens have dominated my thoughts and discussions with others. These events are reshaping life in America and around the world.

Thus I was torn on Monday, leaving my home to venture to Las Campanas for two nights with MIKE (Magellan Inamori Kyocera Echelle) on the Clay Magellan Telescope -- I felt like I needed to be present and engaged in the US (and maybe attend some protests), but these nights were assigned months ago, and could not be changed. I have been looking forward to them, too; observing is my favorite part of my job. When I tweeted to my friend, Hubble Fellow (at Carnegie DTM) Jackie Faherty, "Dang it, @jfaherty, why do we have to be out of the country?", she replied, "For the sake of the stars!"

And so, this week, I am blogging from Las Campanas. As Sabrina wrote in her post below, "sitting on a mountaintop in a remote corner of the world collecting photons surrounded by a vast and peaceful darkness is what made me fall in love with astronomy. I also always enjoy gathering with other astronomers and engineers over dinner and hearing about all the different ways they are trying to understand the universe." Observing, for me, is a time to reflect and be thankful for the amazing opportunities that I have, and share in the experience with others (like on this blog). Thanks to modern technology, I can also "be present" mentally in the discussions online regarding the events and issues above. There's nothing like this view:
, taken by my friend and fellow observer Yuri Beletsky, to make me want to expand our understanding of stars, planets, and our place among them in the universe, including amongst each other on *this* planet.

Interacting Dwarf Galaxies with Magellan Baade and the MMTF

Remote observing certainly has its perks. I don't have to miss meetings/classes or sit for hours on a plane. I can put my kid to bed, do my observing, and then be there when she wakes up in the morning. I also don't have to dip into my precious travel funds.

But sitting on a mountaintop in a remote corner of the world collecting photons surrounded by a vast and peaceful darkness is what made me fall in love with astronomy. I also always enjoy gathering with other astronomers and engineers over dinner and hearing about all the different ways they are trying to understand the universe.

So I was super excited to have the opportunity to take my first trip to LCO last week. My trip was funded by the L'Oreal USA For Women in Science grant I was awarded last year. My fellow observers were UVa graduate student Sandy Liss and former UVa grad but current U de Concepcion postdoctoral fellow George Privon. Upon arrival, Sandy and I tripled the number of women present.

We had two gorgeous nights to take some really stunning narrowband (Halpha) imaging of interacting dwarf galaxies with the Maryland Magellan Tunable Filter on the Baade. We quickly learned that while tunable filters are such a fantastic idea, they are not the easiest instruments to calibrate. Lucky for us, MMTF PIs and experts Sylvain Veilleux (U Maryland) and Mike McDonald (MIT) were hugely supportive and generous with their time. Mike especially went above and beyond to help us out. Thanks, Mike!

It was one of those runs where the nights were long (10 hours of pure dark plus another 3 of twilight) and calibrations took most of the afternoon so we really only had about 4 hour chunks of time in which to find sleep, a shower, and a hot meal. The nights were made even longer by the impending ALMA proposal deadline to which George and I were both shackled.

The support and help from all the people there made it all manageable, and I have to give a special shout out to the cooks who made special, protein-packed vegetarian meals just for me. Thank you!

My only complaint was the lack of working internet for most of our visit. At the time, while learning a new instrument and finishing ALMA proposals in between exposures, the lack of googling-capabilities or access to my beloved ADS drove me mad. Thankfully, now that I have some perspective, I can laugh at myself for traveling over 30 hours via 2 cars, 1 tram, 3 planes, and 1 pick-up truck to arrive at a remote mountaintop in the Chilean desert, only to be outraged over the lack of speedy wifi.